Very striking is the imposing Moeierboom on the Markt in Etten-Leur. A green monument. Voted The Dutch Tree of the Year 2020. Read more

One of the most famous spots in Etten-Leur is the Moeierboom on the Markt. The Moeierboom is a large-leaved linden (Tilia platyphyllos). The tree does not have the normal shape of a lime tree, which, given its age, should have been 20 meters high. The tree has probably lost its top due to lightning or a storm. Due to its age, the heavy branches are supported by an iron frame. Through consistent care and 'bonsai-like' pruning, the tree has always retained its distinctive crown shape. 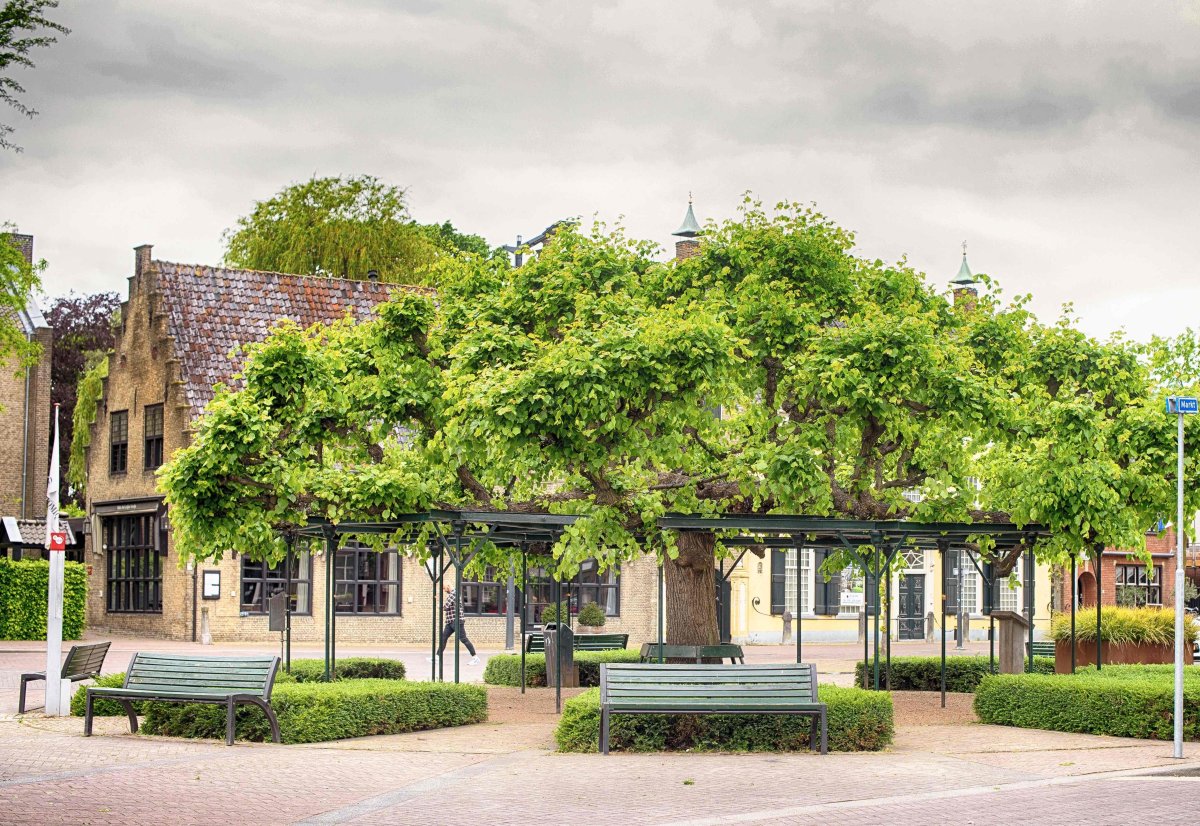 There are approximately 1,350 lime trees of various species in Etten-Leur. Their heart-shaped leaves symbolize love, their blossoms symbolize fertility and tranquility. The oldest lime tree is on the Markt, the Moeierboom. The tree was planted more than 345 years ago. That happened at the place where justice was spoken in the Middle Ages. A place where criminals were convicted and innocents acquitted.

The Moeierboom has been a symbol of connection all these years. Deeply rooted in the heart of Etten-Leur. The characteristic tree is a place for meeting, fraternization and entertainment on sunny days and because of its more than 8,000 lights a beacon of light in the winter months.

The tree cherishes 1001 events, stories and emotions. Early loves have blossomed under her long gnarled branches. Everyone remembers that first kiss under the tree. The Moeierboom saw Vincent van Gogh strolling here and Van Gogh saw the tree standing here…

Election
De Moeierboom was voted The Tree of the Year 2020 during the national election in October last year, with an overwhelming majority of 3,593 votes. The two-stemmed wingnut in Middelburg (province of Zeeland) finished at number 2 with 2,450 votes. The red beech in Domies Toen in Pieterburen (province of Groningen) finished in 3rd place with 2083 votes. This election is organized annually by SBNL Natuurfonds in Leersum. The Moeierboom will be succeeded as Tree of the Year in 2021 by the lime tree next to the old rectory in Maasniel, Limburg. In February 2022, this lime tree will represent the Netherlands at the European Tree of the Year election.

Importance and beauty
This election aims to make people aware of the importance and beauty of trees. The Moeierboom is iconic in the area where it stands and forms a beautiful ensemble with the buildings around it. Moreover, she is a true multi-tasker. The tree fulfills a function in the production of oxygen, the storage of CO2 and water. It is also a stronghold of biodiversity, as it can host up to 30,000 critters and microorganisms. And what this tree is also very good at is that it promotes social cohesion. All this made the Moeierboom an ideal candidate for the European Tree of the Year election. De Moeierboom eventually finished in a beautiful sixth place with no less than 34,244 votes!

Want to know more about the European Tree of the Year? Then look here .